“Place your forehead here, turn your head, and position your eye over the hole. Push your face gently against the bumper and look for the light to turn green. Now open your eye as wide as you can” Then the doctor’s assistant clicked the Optomap’s camera button and a huge flash of green light crossed across the screen. My retina had just been captured on film.

After a few more space age machines puffed air into my eye to measure pressure and tracked my eye as it found a flashing red light, I was taken to a private exam room, where the assistant asked me questions regarding why I was there that day. It was the first time I had had an eye exam in more than a decade.

I explained I’ve had an eye twitch for several years and am suspicious one of my eyes is stronger than the other causing strain and possibly the twitch. I can see fine, and I can read but heavy computer use followed by driving is a major strain. I feel squinty all the time.

She had me hold an eye occluder over my left eye and read the letters being shown in the framed wall mirror which reflected a computer screen behind my exam room chair. I was able to read the smallest letters with my right eye, but my left eye was considerably weaker at the farther distance. I was shocked, yet not surprised since this was why I was here.

When the eye doctor himself came in he placed the phoropter in front of my face and used his magician’s hands to quickly switch lenses in the machine. “Which of these looks better to you, number one or two? Three or four? Five or six?” This went on for quite some time as he flipped the lenses and I tried to keep up with which letters looked clearest. Every so often I’d say, “oh, that’s nice!” The letters would be crisp and black with clear edges, it was like I could see the letters in HD. And quickly he’d take it right back out of view.

Then he wanted me to position and align two images in my field of view. One of my eyes sees objects slightly above and to the right of the other eye. This causes my brain to have to merge the two images into one while leaving the edges blurry. The “nice little” prescription he was cooking up for me was going to make it all clearer.

My eyes are not THAT bad he said. He was not going to tell me I had to wear these glasses all the time, but he thinks I’ll like wearing them at the computer most. I’m a little nearsighted in one eye and a little farsighted in the other and have astigmatism in both at different levels. He could give me two different prescriptions he said, one for computer work and one for driving, but he preferred to give me a prescription that I could wear all the time that would balance the benefits of both far and near vision.

Computer work makes your eyes strain and focus naturally; while looking at far distances relaxes your eye. The doctor warned me that I need to regularly take breaks from staring at my computer screen in order to relax my eyes. “Take a step back.”

How right he is! When we get entrenched in a detailed project with many parts, the part we’re working on can take over our field of vision and concentration, it monopolizes our thoughts and our task list. When we step back from the project and look at it from afar, look at the big picture, that’s when we notice whether or not we’re still on course or have strayed from the original destination or goal.

We need a balance of perspectives. Of course, we need to spend a bulk of time on the detailed analysis, but we also need to switch perspectives to view the project from afar. This is when we may notice that we’ve forgotten about a major goal in the project, we’re veering away from the original intent of the project, or we've begun to over-complicate it. By stepping back we allow ourselves to notice the gaps.

How many times have you written an email, reread it before sending and then later on, after spending time away from it, you open it up in your sent mail and notice a missing or misspelled word? Your fresh eyes notice a lot more than your entrenched eyes.

To maintain the level of quality you expect to offer your clients you owe it to them and to yourself to step away from a project regularly, see it from a distance, and then step back to it with “fresh eyes.” You may find that your project “just needs a little refinement.” Like my eyes. 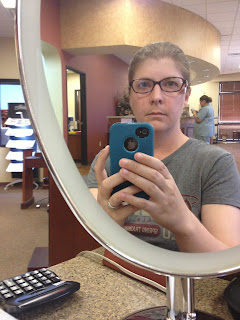 The Morrow Plots are corn fields located on the University of Illinois at Urbana-Champaign campus.  During my freshman orientation campus tour in 1995 our group was told these cornfields are the oldest in the U.S. (first grown in 1876) and have been preserved as such an important part of the University's history that the undergraduate library was built three stories underground as to not cast a shadow on the cornfields, risking inadequate sunlight conditions. Wikipedia says that the University master plan at the time (1966) required a large open plaza at that end of the campus, thus also demanding the library be built underground.  Whatever the true reason for building an underground library, the innovation seed was planted and architects had to find their inspiration.  I finally made it back to UIUC in September and here are a few photos of the library and Morrow Plots: You can find more photos and information from the UI Histories Project: Click here
Read more

We have some dog treats that Sadie doesn’t like; she seriously spits them out. Standing in front of the refrigerator, I say to my husband, “should we just throw them away?” “No, we’ll get rid of them little by little by throwing a few over the fence into the neighbors’ yards for their dogs,” Richard says with a sly grin on his face. “That’s not a bad idea” I say. This is not the first time I’ve used that phrase, and I’ve been catching myself using it more frequently with friends and family. Why do I say that’s not a bad idea rather than actually acknowledging a good idea, or dismissing a bad idea? As per my nature, I took to the internet to see if I could find some clarity on the origin or psychology of “that’s not a bad idea” but instead I was barraged by headlines and copy that used the phrase: “Paying Attention to PC Makers is Not a Bad Idea” Motley Fool June 12, 2013 “Tao of Pooh? Doing nothing not a bad idea in this market, says GMO’s Montier” InvestmentNews
Read more