Showing posts from 2010
Show all

What does Ideas Inspire Innovation mean? Below is a graphic created to show the flow and definitions of the message: If we interchange some of these definitions we come up with more tangible yet flexible combinations: Opinions influence introductions. Beliefs produce new methods. Thoughts bring about change . It’s easier to provide examples of these new translations, examples that are less reaching and more elementary, more everyday in their nature. Opinions influence introductions. I give presentations at work. Usually these presentations involve interpretation of data or research. Of course any information presented has a slice of opinion in it. After presenting to a large group it’s typical that I encounter a face I do not recognize but that recognizes me and has an opinion about what I presented. Another example could be regarding any organization, volunteer effort, or other group you have joined or wanted to join. Usually an opinion -- whether it’s a political affiliati
Post a Comment
Read more

By Amy Anderson - October 28, 2010
I've been thinking about evolution and innovation lately.  What is the line that separates one from the other?  Dictionary.com tells us that evolution is any process of formation or growth; development; a process of gradual, peaceful, progressive growth or development; whereas, innovation is defined as something new or different introduced.  To me this means that innovation  IS evolution because it's a process of growth.  But then again if you rely on the second definition of evolution it must be gradual or peaceful growth.  If innovation occurs abruptly or disruptively, it is only innovative and not evolved.  So is it better to be peacefully evolved or disruptively innovative?  Oh, but how many sides of this coin exist!  How many people get to vote on the idea being new? Who gets to make the judgment that it's a peaceful progression.  A beaver builds a dam. That's peaceful to the beaver but could be disruptive to the hiking trails.   An engineer builds a dam.
Post a Comment
Read more

The Morrow Plots are corn fields located on the University of Illinois at Urbana-Champaign campus.  During my freshman orientation campus tour in 1995 our group was told these cornfields are the oldest in the U.S. (first grown in 1876) and have been preserved as such an important part of the University's history that the undergraduate library was built three stories underground as to not cast a shadow on the cornfields, risking inadequate sunlight conditions. Wikipedia says that the University master plan at the time (1966) required a large open plaza at that end of the campus, thus also demanding the library be built underground.  Whatever the true reason for building an underground library, the innovation seed was planted and architects had to find their inspiration.  I finally made it back to UIUC in September and here are a few photos of the library and Morrow Plots: You can find more photos and information from the UI Histories Project: Click here
Post a Comment
Read more

By Amy Anderson - March 22, 2010
An article in the March issue of Forbes detailed how a Reno man makes a living by basically playing the saranwrap game you played on your college buddies but on a much larger scale.  On a hunt to find a way to protect his boat from the elements, Michael Enos, couldn't find what he wanted so he ordered some plastic and some heat guns and figured it out by himself in just three days. Nearly fifteen years later, he sold off his rent-a-potty business that supplied the Burning Man festival and moved on to co-found FastWrap -- a shrink-wrapping business that advertises "weatherization through innovation" From wrapping boats to patio furniture to casinos, and providing shelter in disasters to shelter from sun damage, the shrink wrapping business has been around much longer than 2007.  Fast Wrap's competitor, Global Wrap, has been around since 1981 and the ideas was said to have been first developed by the Swedes in the 1960s.  Is it coincidence the competitors started in
1 comment
Read more

A phone made of corn? 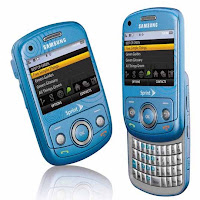 Okay so I had heard all about biodiesel and using corn as an energy source, and seriously how many of our food products have corn syrup or other corn products in them?  Corn nearly makes our world go round. But here's a new one for you...  Samsung recently came out with the Reclaim phone which is made of 40% corn-derived bio-plastic.  cnet gave it 3.5 stars out of 5 and I think cnet is fairly reliable. The links I looked at show the phone costs about $50 with a 2 year contract with Sprint.  They also have it in a fitting green color.  I'm a fan of blue though so I'm showing the blue version below, since even the blue version is "green."  More on the phone here: http://www.switched.com/2009/08/06/samsungs-eco-friendly-reclaim-phone-is-made-of-corn/ http://reviews.cnet.com/cell-phones/samsung-reclaim-sph-m560/4505-6454_7-33743841.html http://www.fastcompany.com/blog/ariel-schwartz/sustainability/sprints-biodegredable-phone-really-green
Post a Comment
Read more

By Amy Anderson - March 08, 2010
This past week in Arizona we've seen multitudes of rainbows due to extraordinary amounts of rain. We've achieved 7 months of typical rainfall in the past several weeks and the rainbows have been incredible -- full rainbows across the sky, double rainbows on top of double rainbows, rainbows eight colors deep.  I swear the next rainbow I see will rain casino tokens down from the sky.  Anyway, all the excitement over rainbows reminded me of my favorite inspiring TV show from my youth, The Reading Rainbow.  I wanted to learn more about how the show started and the people behind the show so I conducted some in-depth ten-minute google research.  My web sources indicate new episodes stopped production in 2006 and PBS finally cancelled airing of the show in August of 2009. So instead of a inspirational moment we will eulogize the show. The Reading Rainbow's mission was to bring the love of learning to kids, ages 4-8, making the bridge from paperback books to "fat" boo
Post a Comment
Read more

By Amy Anderson - March 07, 2010
No one can convice me that this man, Perry Edinger, is not inspirational.  An article ran in The Arizona Republic seven months ago but I still remember it like it was yesterday.  I'm sure Perry, the man in question, remembers much more.   The article brings us the story of the Badwater Ultramarathon, which is known globally as "the world's toughest foot race."  The event showcases 90 of the world's toughest athletes—runners, triathletes, adventure racers, and mountaineers as they travel, ON FOOT, 135 miles non-stop from Death Valley to Mt. Whitney, CA in temperatures up to 130 degrees. If you don't know, Mt Whitney is the tallest mountain in the continental USA.  Just climbing that in one day is a feat in itself.  To run or walk your way from Death Valley to Mt Whitney is seriously something close to the story of Atlas carrying Earth on his shoulders. The 90 people who master this race, do so with a dignity and perseverance very rarely ever seen in publi
Post a Comment
Read more

By Amy Anderson - March 05, 2010
Fuel Your Creativity published some photos of modern bicycles that have really stuck with me over the past few weeks.  One commenter criticized the bikes because they would not work in a realistic world.  The site's editor responded with "These are concepts that are in-line with concept cars. Rarely does something like this get produced in its entirety but, they are made to push the industry of new technology and new ideas. Much like cars, only parts will be produced, like the handle bars or something of the sort. Bikes that are on the market are very streamlined and lightweight because of additions to the industry like carbon fiber and titanium. So, bikes looking like this may not be far off. Race bikes that are used in the Tour De France and other competitions are not comfortable for short or long distances but, are built for speed." I think he's exactly right.  The strange and unique may not be realistic for the mass market right now but they certainly do caus
Post a Comment
Read more