By Amy Anderson - September 18, 2010
The Morrow Plots are corn fields located on the University of Illinois at Urbana-Champaign campus.  During my freshman orientation campus tour in 1995 our group was told these cornfields are the oldest in the U.S. (first grown in 1876) and have been preserved as such an important part of the University's history that the undergraduate library was built three stories underground as to not cast a shadow on the cornfields, risking inadequate sunlight conditions.

Wikipedia says that the University master plan at the time (1966) required a large open plaza at that end of the campus, thus also demanding the library be built underground.

Whatever the true reason for building an underground library, the innovation seed was planted and architects had to find their inspiration.

I finally made it back to UIUC in September and here are a few photos of the library and Morrow Plots: 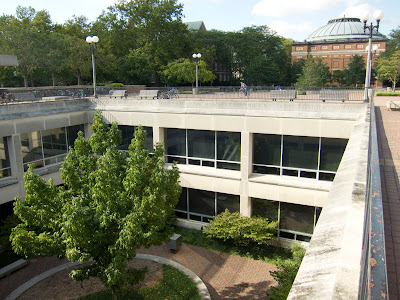 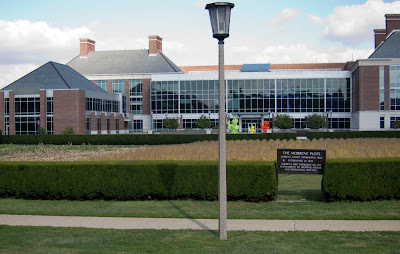 You can find more photos and information from the UI Histories Project: Click here
corn libraries

We have some dog treats that Sadie doesn’t like; she seriously spits them out. Standing in front of the refrigerator, I say to my husband, “should we just throw them away?” “No, we’ll get rid of them little by little by throwing a few over the fence into the neighbors’ yards for their dogs,” Richard says with a sly grin on his face. “That’s not a bad idea” I say. This is not the first time I’ve used that phrase, and I’ve been catching myself using it more frequently with friends and family. Why do I say that’s not a bad idea rather than actually acknowledging a good idea, or dismissing a bad idea? As per my nature, I took to the internet to see if I could find some clarity on the origin or psychology of “that’s not a bad idea” but instead I was barraged by headlines and copy that used the phrase: “Paying Attention to PC Makers is Not a Bad Idea” Motley Fool June 12, 2013 “Tao of Pooh? Doing nothing not a bad idea in this market, says GMO’s Montier” InvestmentNews
Read more